The company’s wish is to familiarize the world with the abundance and richness of Greek flavors and products since the fertile lands and temperate climate of Greece yields products whose premium quality and exceptional nutritional value have been showcasing them since antiquity. It is precisely that ancient wisdom that “Hestia” wishes to spread through its services and products. Case in point, the company’s very name: Hestia. In ancient Greek “hestia” means “hearth” or “fireside” and in Greek mythology Hestia was the goddess of the hearth, the family, and domesticity. She was so important to the ancient Greeks that each household maintained an altar dedicated to the goddess Hestia, older sister of Zeus. “Hestia” is a company which insists that farming under its watchful eye be anchored on organic farming standards and that harvesting be carried out carefully by hand so that the herbs may reach consumers without having lost any of their superior sensory traits.

An Organic herb, prized for its flavor. It is an excellent seasoning for salads, meats and fish. Use it to liven up your olive oil, sprinkle it on feta cheese and add to your sauces, pies and potatoes. Oregano is a seasoning rich in vitamin C, magnesium, potassium, iron, phosphorus, and beta-carotene. In Greece, it has been traditionally used as a folk remedy due to its healing, analgesic, antiseptic and, anti-rheumatic properties. An Organic herb, also prized for its flavor. Same as Oregano, it is an excellent seasoning for salads, meats and fish. Use it to liven up your olive oil, sprinkle it on feta cheese and add to your sauces, pies and potatoes. Thyme is an herb with multiple properties and health benefits (hair loss, cough, bronchitis, etc.) Ancient Greeks ate an energizing blend of Thyme, honey and vinegar. Many elderly Greeks consume large quantities of "tea" from Thyme to stimulate the function of the mind. It is used in salads, sauces, white and red meat and fish, eggs, ice cream, salads, etc. Tarragon leaves are added to soups for flavoring. Stems are cooked as a vegetable. It is one of the best aromatics for vinegar and mustard. Since Tarragon has a strong flavor, only small amounts should be added to our foods. Tarragon leaves contain iodine, potassium and vitamins A and C. The infusion of its leaves can be used against nausea, hiccups, insomnia and also as a digestive, an appetizer and a tonic. The Romans used it on wounds from snake bites. Verbena is the most famous medicinal herb in the world well known for contributing towards weight loss, the burning of fat, combating the retention of fluids and reducing cellulite. It also helps to increase the metabolic rate and to treat against bloating and gas. It is a very tasty drink with a slightly lemony flavor and is ideal for the nighttime as it offers a feeling of relaxation and wellness. Its anticonvulsant properties help against stomach disorders such as dyspepsia, flatulence, gastric neurosis, migraines and colic in the stomach and the intestine. Verbena possesses antipyretic properties, since its diuretic action helps excite perspiration and sweating, thus regulating the body temperature when used as a beverage.

Sage leaves possess antiseptic, expectorant and spasmolytic properties. The plant itself has stomach, tonic and cardio-tonic properties and it is used against neuralgia. As a beverage it is ideal as a mouth treatment in the case of injuries, thrush and pharyngitis. It also has antibiotic, antifungal, antispasmodic and hypoglycemic properties. In ancient times it was used to treat snake bites, to increase fertility in women and to expel evil spirits. In the Mediterranean area it is dried and served as a beverage. It is used in cooking to flavor broths, food and vinegar, while it is considered by beekeepers as a plant which provides fine honey. Its taste is quite spicy and it pairs well with very fatty meats and cheeses. According to recent research, the use of Sage has a positive effect in the treatment of Alzheimer’s disease.

The ancient Greeks considered Rosemary a gift from Venus. Rosemary stimulates blood circulation to the brain and improves concentration and memory. It is useful for nervous headaches and migraines, it elevates mood and is useful in cases of depression. Rosemary chopped leaves are excellent to add when cooking lamb, fish, chicken and rabbit, offering to your dishes a very distinctive taste! Greek Mountain Tea is a unique plant that grows in the mountains of Greece. It grows in rocky places at high altitudes. It is preferred for its beneficial effects against colds and the inflammation of the upper respiratory system. It combats indigestion and gastrointestinal disorders and, is considered to possess antispasmodic, analgesic and healing properties. It is caffeine free and has a great aroma and taste. Previous
Next
Use of Herbs

Our herbs can be used in the production of single ingredient extracts (ml/100gr) due to the high concentration in oils and the absence of contaminants.

Available packaging in 500gr-1000gr for professional use. Customized retail store packaging in glass (10-70gr), laminated paper or plastic pouches (10-50gr) for supermarkets. All materials are 100% recyclable. 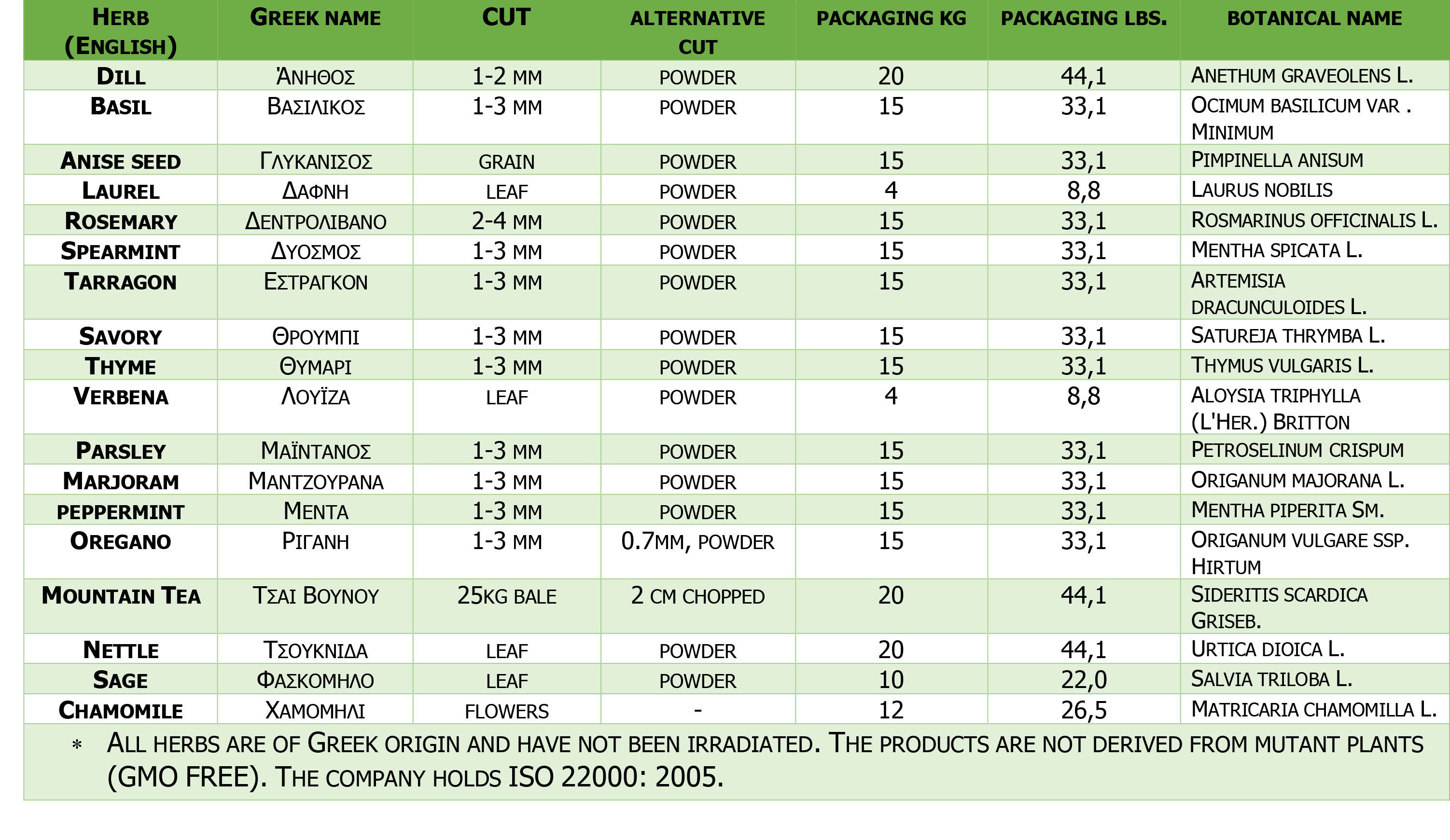 “Themis Farm” is one of largest agricultural businesses of Trikala in the regional unit of Thessaly, Central Greece. The farm occupies more than 400 hectares (920 acres) of farmable land that is combined with oak tree forests. The company owes its success to its dedication to and love for the Greek countryside and to its implementation of new technologies. The farm was established in 1956 as a corn and wheat farm. As of 2012 Themis Farm specializes in organic hay. Today, due to the rising demand for Greek herbs, part of the farm’s cultivations is devoted to organic oregano and sage. It was the same demand that encouraged the company to establish “Hestia”, an offshoot, in 2013 with a view to exporting and distributing quality Greek herbs.

1924: The forest is renamed to “Zigra-Meritsa-Vanaklioti”.

1930-1934: Steven Vanakliotis gets permission and logs the forest for the first time.

1955-1956: Steven Vanakliotis gets permission and logs for the second time the forest.

1961-1964: Themis Levounis gets permission and clears 100 acres of forest and lays the foundations to create farmland.

1965: The first cultivation of alfalfa and wheat start while he builds a barn and a house.

1968: the first wells are created in order to address the needs of irrigation.

1992-1995: Themis Levounis gets permission and logs part of the forest.

2003: The farm passes into the hands of his wife Olga Levounis and his daughter Chara Levounis.